We all watched the 65th Primetime Emmy Awards in anticipation of what could have been history in the making. Fan favorite actress Kerry Washington, better known to us as “Olivia Pope” on the ABC hit series ‘Scandal’ was nominated for Outstanding Lead Actress in a Drama Series. She was the first African-American since Cicely Tyson in 1995s ‘Sweet Justice’ to get nominated. From a crisis project manager that enables her team to go beyond helping their clients, to restoring their lives along with maintaining her own personal life and role as the side-chick to non-other than Mr. President. Scandal was a hit right from the start, an addictive political drama that had you anticipating week after week what would happen next. The viewing audiences lay in suspense as to what would happen next in each episode for the series… We thought that suspense-filled plot twists and turns would be an Emmy award for Kerry. But our anticipation fell short with Homeland’s Claire Danes walking away with the award for Outstanding Lead Actress in a Drama Series. Scandal! One of the most gifted, poised,charismatic and talented actresses in showbiz, Kerry Washington, honestly deserved this stellar compliment. Washington appeared happy just to have been nominated. She said in a statement via Twitter, “Great night! Every single woman in our category deserved to win! So happy for Claire. And ALL tonight’s winners & nominees!” Check out more of her tweets below thanking all her supporters. 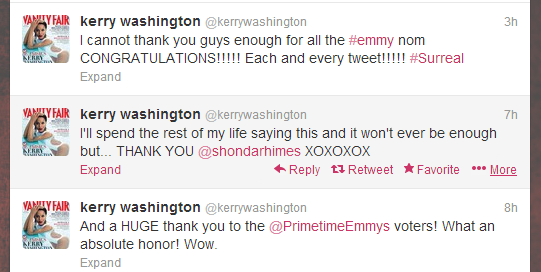 With only 5 more days until the hit series returns, I can’t help but wish that I could have hired Olivia Pope and her associates to fight for her reputation as the most deserving, talented and outstanding leading actress for this years ceremony. The Emmys missed out on the opportunity to make history with Kerry Washington, the first African-American to play a lead in a network TV drama since 1974. If Kerry would have won, she would have been the first African-American woman to win an Emmy for Outstanding Best Actress In A Drama Series. Could this be a Scandal? Can you believe that it has been four decades since a African-American woman was a lead in a top-rated TV drama series? While award shows at times may seem a bit prententious and superficial, we cannot deny being acknowledged as an award winner in your respective field for your hard work and dedicaation can be one of the most significant career achievements. Despite the missed opportunity for the Academy of Television Arts and Sciences to make history, Olivia Pope aka Kerry Washington-we are proud of you!

For now I celebrate, knowing this is only the beginning for Washington. I am so excited for season 3 of the acclaimed series Scandal and of course Kerry’s shot at the 2014 Emmys.

Tune in to the new season of Scandal October 3rd 10pm|9c on ABC- Check out the recap of everything you need to know:  Recap Scandal Season 1 and 2

Blogger/Staff Writer for The D Network

Previous Post PR is not Marketing or Advertising-It's Free!

Next Post R&B Divas: LA Gives a Fierce Dose of Reality and Entertainment for Season One Sizzle